Fumigation is a method of pest control that completely fills an area with gaseous pesticides—or fumigants—to suffocate or poison the pests within. It is used to control pests in buildings (structural fumigation), soil, grain, and produce, and is also used during processing of goods to be imported or exported to prevent transfer of exotic organisms. This method also affects the structure itself, affecting pests that inhabit the physical structure, such as woodborers and dry wood termites.

Fumigation generally involves the following phases: First the area intended to be fumigated is usually covered to create a sealed environment; next the fumigant is released into the space to be fumigated; then, the space is held for a set period while the fumigant gas percolates through the space and acts on and kills any infestation in the product, next the space is ventilated so that the poisonous gases are allowed to escape from the space, and render it safe for humans to enter. If successful, the fumigated area is now safe and pest free. 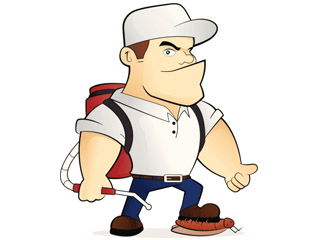